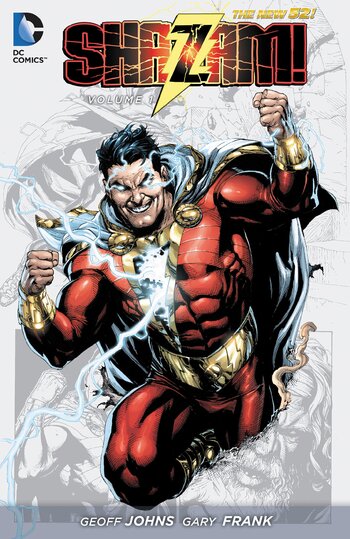 Shazam! is a comic book series produced by DC comics, a reboot of Captain Marvel as part of their New 52 relaunch. It was written by Geoff Johns and drawn by Gary Frank, running as a back-up to Justice League (2011) through issues #7 through to #21 (except for issues 12, 13 & 17, which it skipped, along with being the main story of issues #0 and #21).

Once upon a time, there was a wizard known as Shazam, who was looking for someone to bear the power of the gods and be the champion of magic, Earth's mightiest mortal. And he found a champion in the kind and pure-hearted Billy Batson, who became Captain Marvel, fighting enemies such as Black Adam, Doctor Sivana and Mister Mind.

This isn't that story. In this story, Billy Batson is a bad-tempered little jerk, who can't stand his adopted siblings, and the wizard has been searching among dozens of candidates for a new champion, to no luck. Which is a problem, as one Doctor Sivana has freed the fallen champion Teth-Adam from his tomb in a desperate attempt to save his family. Billy might not be the best choice, but with the wizard running out of options, he'll just have to do. And maybe, hopefully, use his newfound powers for good.

This origin and plots setup here would later be revisited in Shazam! (2018), also written by Johns.

SHAZAM! (2019) is based largely on this, with elements taken from other versions.