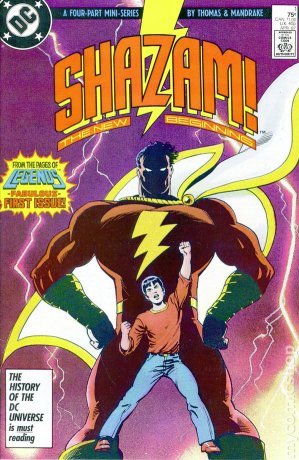 Shazam!: The New Beginning was a four-issue mini-series that was published by DC Comics in 1987, following the release of the Legends mini-series but taking place just before it. The series was written by Roy and Dannette Thomas with art by Tom Mandrake. It was the first Post-Crisis adaptation of the origin of Captain Marvel that was considered canon until years later when it was replaced by The Power Of Shazam! by Jerry Ordway. Crisis on Infinite Earths: The Compendium now relegates this story to "Earth-85" in the DC Multiverse. However, this series established a permanent change to the character: from then on, Captain Marvel is definitely Billy transformed into an adult superhero with his youthful personality, instead of Captain Marvel being vaguely treated as a separate individual as before.

In this series, which is now mostly set in San Francisco, Billy Batson was orphaned by his parents as a teenager and, through a court case to determine who would have custody of the child, goes to live with his uncle Dr. Thaddeus Sivana instead of his great-uncle Dudley Batson. However, he soon finds out what Sivana was after and runs away, only to meet up with the ancient wizard Shazam who gives him the power to become Captain Marvel so he could deal with his Evil Counterpart Black Adam, who was released from exile into hyperspace by Sivana to Take Over the World.