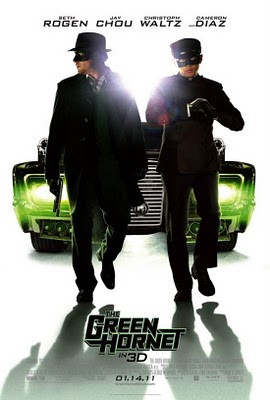 The Green Hornet is an action-comedy directed by Michel Gondry and starring Seth Rogen (who also co-wrote the script), Jay Chou and Christoph Waltz. It adapts the classic character and brings him into the modern world with a more comedic and slapstick style.

As for its Super Hero Origin, Britt Reid is the spoiled and lazy son of a newspaper tycoon and he is given a wake-up call when his dad dies and the responsibility is passed on to him. Now completely lost without the opportunity to piss off his dad, he strikes up a friendship with Gadgeteer Genius and martial arts master Kato. This leads to a night of drunken vandalism when they end up foiling a late-night robbery/rape attempt.

Feeling a sense of accomplishment for the first time in their lives, they set out as vigilantes to track down the criminal underworld, with their particular angle being that they are acting as rival criminals. Britt uses the resources of his father's paper and the intelligence of his secretary, Lenore Case, to unknowingly further their mission. This catches the attention of the underground kingpin Benjamin Chudnofsky, who wants them dead.