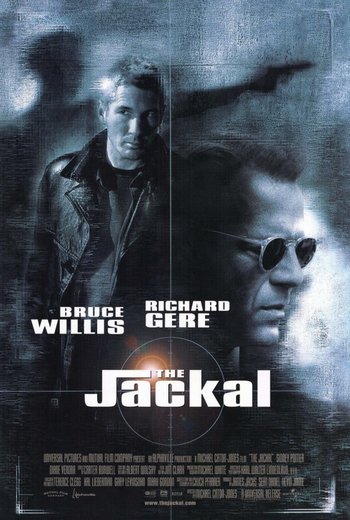 The Jackal is a 1997 suspense thriller starring Bruce Willis, Richard Gere, Diane Venora, and Sidney Poitier. It was directed by Michael Caton Jones. While its title is similar to the 1973 film The Day of the Jackal, it shares only the main story point of an anonymous assassin and some general plot elements.

Russian mobster Terek Murad has declared open season on the Russian MVD and the FBI over the shooting of his brother in a Moscow nightclub. He hires the Jackal (Willis), a nasty assassin whom nobody has even seen, to kill the Director of the FBI. With nowhere else to turn (except a woman who used to work with the Basque separatists, who is now in the USA but whose exact whereabouts in unknown to all save Mulqueen), FBI Deputy Director Carter Preston (Poitier), who was present at the Moscow shooting, and Major Valentina Koslova (Venora) of the MVD (who pulled the trigger in that shooting) enlist the reluctant services of Declan Mulqueen (Gere), an imprisoned IRA sniper, to track the Jackal down, for Declan is the only other person who can positively identify the Jackal.

The Jackal contains examples of: