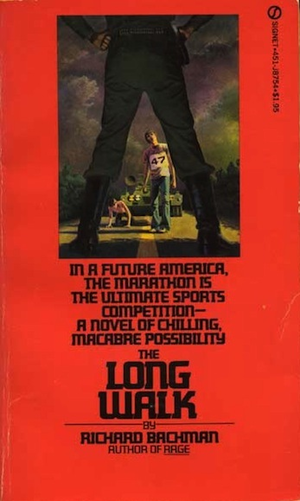 The Long Walk is a novella by Stephen King published under the pseudonym Richard Bachman in 1979 as a paperback original. It was collected in 1985 in the hardcover omnibus The Bachman Books, and has seen several reprints since, as both paperback & hardback. The plot revolves around the contestants of a grueling walking contest, held annually by a despotic and totalitarian version of 1980's America. The rules of the eponymous Long Walk are as follows (at least the ones that are mentioned in the novel):

Not to be confused with the retirement option for judges or Sławomir Rawicz’s disputed memoir of the same name.