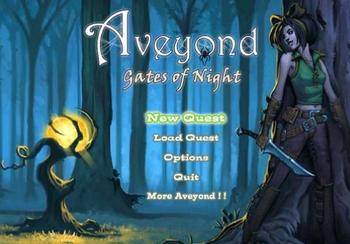 Aveyond is a series of commercial RPG Maker games created by Amaranth Games, and available on their website

The games are set in the world of Aia and normally start out with a Kid Hero happily living their lives until the Big Bad does something that forces them to an adventure and the next thing they know, an old lady tells them that they are part of some prophecy to prevent The End of the World as We Know It.

Ahriman's Prophecy starts out with Talia Maurva, who wants to be "named", or given a life job, but ends up being ordered to go to Thais along with Devin Perry to learn magic so she can save the world from the power hungry Zorom.

Aveyond starts out with a purple-haired girl named Rhen who finds an unconsious priestess that tells her she is the Chosen One who must stop Ahriman from destroying the world.

Aveyond 2 begins with a normal elven boy named Ean who goes on a journey to save the spirit of his best friend Iya when the Snow Queen captures her so she can use Iya's power to freeze the world.

Aveyond 3, or at least, only the first 2 chapters of it, starts out with a thief who is paid to find a magical heirloom in a creepy manor on the outskirts of town. Little does she know that the client is a vampire, Gyendal, who needs this orb to enslave the human race and Take Over the World. In the 3rd and 4th chapters, the game... goes insane. Somehow there's an ancient prophecy involved somewhere and the villain turns out to be... someone unexpected?

Aveyond 4 breaks the typical Hero's Journey formula and stars a retired Big Bad Wannabe who was forced to become an unlikely hero after he loses his dog. Well, the actual plot is about a Mist Wraith princess trying to rescue her younger brother from being sacrificed by cult leader Qetesh to a demon, but that's secondary to Boyle's journey.

Aveyond has a character page which needs more love.

Tropes found in the Aveyond games: