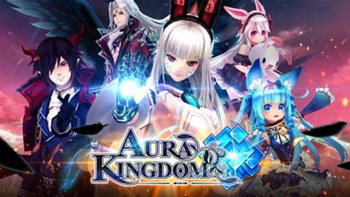 Aura Kingdom (Innocent World in Japan and Fantasy Frontier Online in China) is a Free-to-Play 3D action MMORPG with an Anime style to it. It was made by Taiwanese developer X-Legend and published in America for PCs by Aeria Games in late December of 2013. You can download it here,

and it is now available on Steam. The Mobile Version was localized globally in March 2018, where you can download the app from App Store

The game is set in the world of Azuria, which is split into three planes of existence. High above the sky is the Aura Kingdom, the home of valiant spirits who oversee the world beneath. Far below is Pandemonium, where vicious demons and The Undead reside. The surface itself is called Terra and is home to the mortal races, such as humans, dwarves, and others.

Being stuck between these two opposites, Terra has an unlucky habit of getting caught in the crossfire of spiritual weirdness as the two conflict. Fortunately the mortal races are not left unprotected, as every once in a while the spiritual energy of Gaia will bleed through and select a mortal to become a magical warrior called an Envoy of Gaia. These Envoys are each partnered with a spirit from the Aura Kingdom called an Eidolon. Together they have the power to do great things, but Envoys unable to wield this power will become corrupted and transform into murderous abominations.

You are a young guard from the human village of Skandia who has the (mis)fortune of becoming an Envoy. After witnessing what horrible fate may await you if you fail to control your powers you set off, Eidolon at your side, on a quest to find a way to sever your connection before the inevitable.