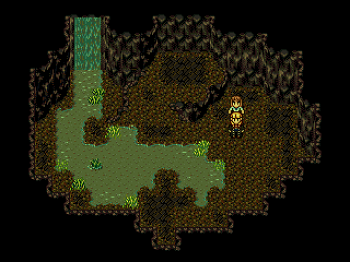 The Longing Ribbon is an RPG Maker horror game that won an award for atmosphere in 2005.

One day, three friends—Jeannine, Matthew, and Sara—and the formermost's dog Sandy are on a trip that takes them through the woods. During the drive, however, they become lost. Shortly after finding a wrecked car with nobody inside, they resume their travel, until Sara notices something—they had just passed a stone path that none but her noticed. Utterly lost, without a clue where they may be headed, and now pelted by a sudden rain storn, the three decide to take shelter at whatever house lies at the trail's end.

Said house is a mansion. A friggin' huge mansion.

Inside, Jeannine wanders, examining the bizarre decor. When she returns to the entrance, where she had left her friends and dog, they've disappeared. In an effort to find them, she searches through the house yet again, until finding the mistress of the mansion. She says that Sara and Matthew have already met her, and that she agreed to let them stay the night. Jeannine hurries upstairs to talk about their temporary refuge, but her friends soon begin arguing over just who wanted to stay in their room: Sara claims it was Matthew, but Matthew's certain it was Sara. They disregard it without much fuss, and prepare themselves for bed.

Though Jeannine does the same, her sleep is brief. She will soon wish she'd never come to the mansion at all.

To prospective players: having been made with RPG Maker 2000, it can only be played on Windows computers.