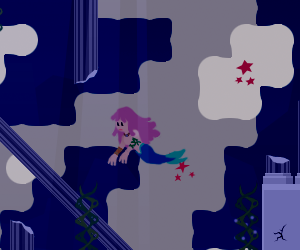 "Open your eyes, dear, for you are alone."
—Introduction
Advertisement:

Lone Siren is a free exploration game released in October 2013 by molegato.

Its premise is simple: The titular Siren wakes up and discovers all of her kind has left, for reasons unknown to the player, and so sets off to look for them. The player will soon find that the only way to accomplish this mission is to find eleven 'magic relics' and hand them over to an unnamed witch, who will then use her magic to help... but not everything is what it looks like and players are up for a couple of surprises.

The game has a heavy focus on ambient and is vague on the setting by design, and was inspired by Yume Nikki, OFF and Ecco the Dolphin, of all things.