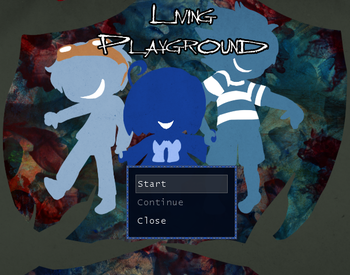 The Living Playground series of freeware RPG Maker games is about the adventures of Tony, Octavio and Pablo, three living toys themselves, playground equipment which can take human form. It was created by Meaka.

The first game, Living Playground was released on PC in June 2014, with the English version available here

The three siblings are exploring outside of an abandoned factory in a snail hunt game. Until they became trapped inside the factory. Now they must find a way to get out....finding the truth about their origins in the process.

A Sequel, Living Playground: The Witch's Puppets, was released

on November 12th, 2018. Tony, Pablo, and Octavio are once again caught up in some truly strange events. Now, however, they are accompanied by two bizarre witches, Haze and Seal, whose origin and motivation are mysterious at first.