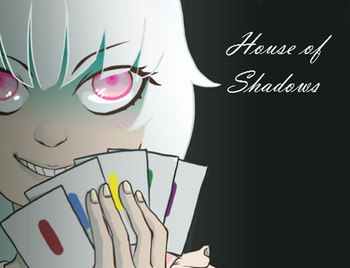 House Of Shadows is a free indie PC game by Tealight Studios, and their first public release. It was made in RPG Maker VX Ace, and is a murder mystery game/affectionate parody of Cluedo.

The game follows Detective Groves, who begins investigating an old house after hearing strange rumours about it. Before the night is through however, strange voices inform present company of impending doom, a fate which only the detective may be able to prevent. Will they be able to catch the murderer in their midst before it's too late?

An updated version is said to be in development, and will introduce new characters. The game can be found here, on GameJolt.

House of Shadows contains examples of: