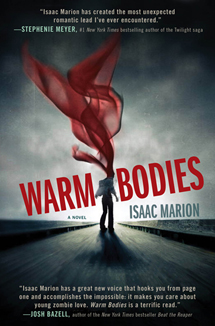 I am dead, but it's not so bad. I've learned to live with it.
— R
Advertisement:

For the film version, go here.

A zombie romance novel, written by Isaac Marion, that originally started as a short story called I Am a Zombie Filled With Love that you can read from here

. After a worldwide, though gradual Zombie Apocalypse, the Living have been forced to retreat to isolated safe-places as the Dead populate the outside world. Out there is our protagonist "R", a zombie who still, in a way, clings to humanity more than his kin, inhabiting a deserted airport terminal which they only leave to hunt food.

But in a hunt gone slightly awry, R eats a young man's brains and fully acquires the man's memories, motivating him to save Julie, his victim's girlfriend, from the rest of the horde and bring her back to his "home" in the airport. After she realizes that he poses no harm to her and is vastly different from what she has known zombies to be, they start an awkward relationship that changes the futile and rigid ways of both the Living and Dead worlds.

Don't be scared off by the concept similarities that it has to Twilight, or the review quote on the cover by Stephenie Meyer.

Marion has since published two prequels: a novella called "The New Hunger" and a short story called "The Boarded Window

" about R's first winter as a zombie. A sequel novel, "The Burning World", was published on February 7th 2017, and another sequel novel, The Living, has been announced as the conclusion of the series.