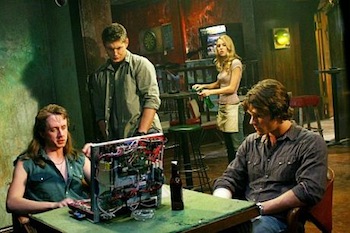 'Cause there's a PBR in it for you.
Sam: You know, I heard you before, Dean, when Andy made you tell the truth. You're just as scared of this as I am.
Dean: That was mind control! I mean, it's like—that's like being roofied, man, that doesn't count.
Advertisement:
Sam: What?
Dean: No. I'm—I'm calling a do-over.
Sam: What are you, seven?
Dean: Doesn't matter. Look, we've just gotta keep doing what we're doing, find that evil son of a bitch and kill it.

One of Sam's premonitions leads the brother to track down another of the Special Children in Guthrie, Oklahoma

, where they meet Andy, who can compel people to do what he wants.

Sam has another premonition, this time of someone committing a murder-suicide. He and Dean suspect that more Special Children are involved, young adults who were visited on their six-month birthday by the Yellow-Eyed Demon and have subsequently developed psychic powers. Ash at the Roadhouse helps them track down a likely suspect: Andy Gallagher in Guthrie, Oklahoma.

While investigating Andy, Sam sees the man from his premonition and manages to keep him from entering the gun store he had seen in his premonition, but then the man steps in front of a bus and dies anyway. At the same time, Andy asks Dean if he can have the Impala, and Dean just lets Andy drive away with it. The brothers realize that Andy's voice can compel people to do what he wants, but Dean is not convinced Andy is behind the death. Andy realizes they are following him and asks them to tell him the truth, which Dean promptly does, but his power has no effect on Sam. While they're talking to Andy, Sam has another vision of a woman setting herself on fire at a gas station. This vision comes true while they're still with Andy, and they realize he is not the killer.

They soon find out that Andy was adopted and has a twin brother, Ansem, raised in another town. Ansem had recently moved to Guthrie and befriended Andy, who knows Ansem as Webber. Sam has another vision: Tracey, a girl Andy cares about, being forced to jump off a bridge. Sam and Andy go rescue Tracey, while Dean, who is susceptible to compulsion, hangs back. Ansem reveals that he admired Andy and wanted to be his family, but had been told by the Yellow-Eyed Demon that he should not let Andy know they were brothers. He killed people because they tried to keep them apart. Dr. Jennings, the first victim, was the doctor who delivered the twins, and Holly Becker, the second victim, was their biological mother. Ansem also reveals that he is stronger than Andy and is able to compel Tracey to jump or Dean to shoot himself by using his mind alone, even if they can't hear him. Before Ansem can kill any more people, Andy shoots and kills him.

The brothers return to the Roadhouse and Ellen interrogates them about their recent hunt. They tell her about Sam's visions and what they know about the other Special Children. They also realize that Ansem's mother did not die in a house fire when he was six months old. Without this pattern to track, they have no idea how many Special Children may be out there.

For this episode = 3 humans; the 2nd Special Child death so far.