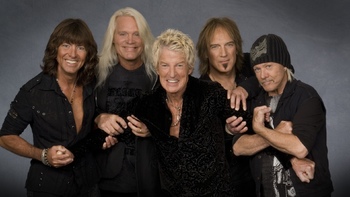 I'm going to keep on loving you
'Cause it's the only thing I wanna do...

REO Speedwagon is an American Arena Rock band formed in 1967 in Champaign, Illinois. It grew in popularity in the Midwestern United States during the 1970s and peaked in the early 1980s.

Initially playing in a style that blended hard rock guitars and drums with frontman Kevin Cronin's high, piercing tenor voice and Neal Doughty's softer keyboard touches, the band recorded several moderately successful albums before breaking out, as many rock bands did at the time, with a live album (You Get What You Play For). They subsequently became one of the foremost Arena Rock bands, achieving great success in the early 1980s. Their popularity waned by the end of the decade, when the rock scene became dominated with Hair Metal groups, but they've stayed together in some shape or form and still play today.

REO Speedwagon hits include "Keep on Loving You" and "Can't Fight This Feeling". Both songs are power ballads. "Keep on Loving You" is one of the first power ballads, and it appears on the group's most commercially successful album, Hi Infidelity. This album also included several other hits, including "Take It on the Run," a song that peaked at number 5 on the U.S. charts.

I can't fight this troping anymore: