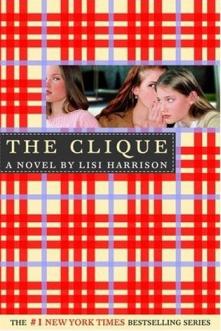 The Clique, a series of middle-school novels by Lisi Harrison, revolves around the lives of the Pretty Committee: Massie Block, Claire Lyons, Dylan Marvil, Alicia Rivera, and Kristen Gregory. These spoiled seventh-graders (later eighth-graders) consider themselves the experts of fashions of Octavian Country Day School, and aren't afraid to let other students know what they think of them. In a nutshell, a series in which the Alpha Bitch and her Girl Posse are the protagonists.

The books were bestsellers, and a direct-to-DVD adaptation of the first book was released in fall 2008 that today is most notable for starring pre-Good Luck Charlie Bridgit Mendler. There's also a graphic novel and DS game. Also has a spin-off series, Alphas, about related characters attending an ultra-exclusive boarding school.

Canonically, the series is as follows:

note Chronologically Charmed and Dangerous was published between Boys R Us and These Boots Are Made For Stalking.
Advertisement: