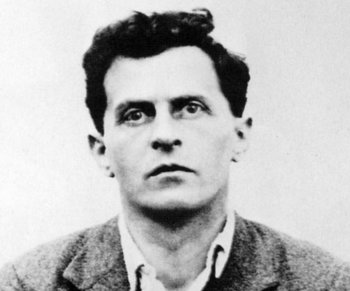 Wittgenstein was also well experienced in leering like a serial killer.
I am sitting with a philosopher in the garden; he says again and again "I know that that's a tree", pointing to a tree that is near us. Someone else arrives and hears this, and I tell them: "This fellow isn't insane. We are only doing philosophy."
—Ludwig Wittgenstein
Advertisement:

Ludwig Josef Johann Wittgenstein (26 April 1889 – 29 April 1951) was one of the foremost philosophers of the 20th century. He made major contributions to formal logic, the philosophy of language and the philosophy of mind and, to a more controversial extent, the philosophy of mathematics. He was notorious for holding back his work from publication until he got it right; in his own lifetime, his entire published output consisted of one book, one book review, an article and a children's dictionary. The book, Tractatus Logic-Philosophicus, outlined Wittgenstein's theory of the relationship of language to reality, in which he famously asserted that the logical structure of language mirrored the structure of reality, that whatever could be said at all could be said clearly, that statements about ethics were meaningless, and that "what we cannot talk about we must consign to silence".

He later came to think that this theory was completely mistaken, in that it didn't account for the many different types of utterance that were not statements about the world but orders, exclamations, or what the later philosopher J.L. Austin

would call "speech acts", and he spent the rest of his career making copious notes towards a second book that would not so much outline a theory as describe the way that philosophical problems can arise from confusions in the use of language. A version of this book was published after his death as Philosophical Investigations.

He was born into a wealthy and cultured but extremely screwed-up family in Vienna in 1889; his father, Karl Wittgenstein, was a tycoon who at one point controlled pretty much all steel and iron production in the entire Austro-Hungarian Empire. Ludwig was the youngest of nine children and two of his brothers committed suicide (and a third, a musical prodigy who vanished off a boat in Chesapeake Bay during a fit of depression, probably did.)

Ludwig was for a while a schoolmate of Adolf Hitler, although there's no evidence that they ever met. He studied engineering in Berlin and Manchester. He soon became fascinated with philosophy and in 1911 he went to Cambridge to study under Bertrand Russell, who initially regarded him as annoying but came to see him as a genius. Later, when Wittgenstein openly disapproved of Russell's freethinking views about marriage and politics, Russell in turn started to regard Wittgenstein as an Insufferable Genius. Wittgenstein served in the Austrian army during World War I (he immediately volunteered when the war broke out, and was decorated several times for his bravery). After the war was over he wrote the Tractatus and gave up philosophy, then made one of the world's worst career decisions by going off to work as a primary school teacher, a job for which he could hardly have been more unsuited. Although the Tractatus was an immediate hit in the world of philosophy, Wittgenstein came to believe that the theory embedded in it was seriously flawed and in 1929 he finally yielded to persuasion and returned to Cambridge to teach philosophy at graduate level. He died there in 1951, of prostate cancer for which, Stoic Woobie that he was, he'd refused treatment. His Last Words were "Tell them I've had a wonderful life!"

Wittgenstein was famously eccentric, at least by the standards of his own time and place (which was mostly Cambridge, England in the early 20th century). He hated the rituals of polite conversation, wore the same clothes all the time (which he did by having several identical shirts, several identical tweed jackets, several identical pairs of trousers, etc. which he chose with extreme care); preferred if possible to eat the same thing at all meals, and had a very austere, almost monk-like lifestyle. He could be a loyal friend, even if he drove his friends mad with his insistence on honesty. He once called around to several friends' houses late at night to "confess" that he'd misled them into believing that his family wasn't Jewish (none of them cared one way or the other and most were annoyed that he'd disrupted their evening). He even had lovers, although it was illegal to be a sexually active gay man in early 20th century England;note Technically, Wittgenstein appears to have been gay-leaning bisexual, having had at least two genuine affairs with women. The point still stands, however. Wittgenstein seems to have been less bothered by the illegality than by his wish to be a Celibate Hero (he wasn't one, he just would have liked to be one).

He had a passion for Crime Fiction and was quite a connoisseur of it, rating the obscure LA pulp writer Norbert Davis

higher than Agatha Christie, whose work he couldn't stand. He also loved Hollywood movies, developed a serious crush on Betty Hutton, and - appropriately for a philosopher who specialised in language - loved hipster slang, frequently dropping into his conversation phrases like "Hot ziggety!" and "Let us case the joint." He was extremely musical and was able to whistle entire classical works from memory. (His older brother Paul was a concert pianist who lost his right arm in World War I and went back to his concert career anyway, commissioning many piano concertos for the left hand, including the famous one by Maurice Ravel.)

Given his colourful personality, it should come as no surprise that since his death he's been depicted as a character in several works of fiction.

Wittgenstein is a character in the following works of fiction: