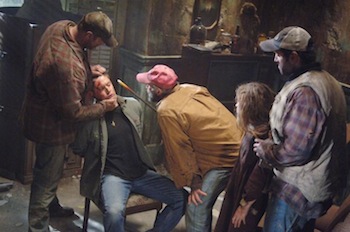 Sam is abducted by a family in Hibbing, Minnesota

, who enjoy hunting the most dangerous game.

The Winchester brothers investigate a disappearance of a man in Hibbing, Minnesota. Before they get far, Sam is kidnapped from the parking lot of a bar. Dean enlists the help of a policewoman, Kathleen, who had a brother who previously went missing, along with many other people in this county. They track a vehicle to an isolated rural area, where they find a family who hunt humans as a family tradition.