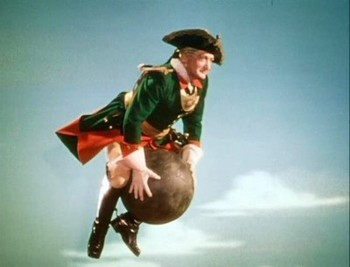 Don't try this at home.
Advertisement:

Münchhausen is a 1943 film directed by Josef von Baky, made in Nazi Germany.

It's based on the popular folk tales about the adventurous 18th-century nobleman Baron Munchausen (spelled "Münchhausen" in Germany, and therefore in this film as well). In the modern day, a descendant of the Baron has invited a young couple for dinner. The young man, who is very interested in the historical Münchhausen, asks the current Baron to tell about his famous ancestor. The latest Baron then tells stories of the grand and magical adventures of his ancestor, which included being a consort to Catherine the Great, riding a flying cannonball into a Turkish fortress, acquiring an invisibility ring, and flying a balloon to the Moon.

Münchhausen was conceived by Joseph Goebbels as a spectacular color extravaganza meant to rival Hollywood productions like The Wizard of Oz. It contains no overt propaganda message, and really not even a covert propaganda message, instead adopting a tone of light whimsical fantasy meant to distract Germans at a time when World War II was turning bad. It was made to celebrate the 25th anniversary of the Ufa film studio, and no expense was spared, including location shooting in Venice (Fascist Italy being in the German orbit).

Compare The Adventures of Baron Munchausen, a looser adaptation of the same source material made 45 years later by Terry Gilliam.