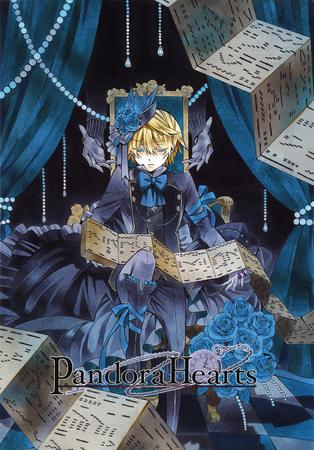 Pictured: Oz Vessalius. Not pictured: Gilbert Nightray and Alice.
"Someone once said it was a dark place that swallowed everything up. Even if that were true, an enveloping darkness like that also contains the light of hope."
—Gilbert Nightray
Advertisement:

You know that manga based on Alice's Adventures in Wonderland in which a virtuous and curious Alice wanders into the enchanting but odd realm of Wonderland, making new friends and finding love along the way?

This is not that manga.

Oz Vessalius is a teenage boy with daddy issues who is about to come of age and be recognized as the heir to his family, which is one of the Four Great Dukedoms.

Unfortunately, things don't quite go as planned, as Oz is attacked by the mysterious Baskervilles and sent to the Abyss for the crime of "existing." There he meets an amnesiac being named Alice/B-Rabbit—a monster called a "Chain" who cannot leave the Abyss without making a contract with a human. Together, Oz and Alice make it out of the Abyss only to be met in the real world by three agents of Pandora who inform Oz that he has been missing for ten years instead of just a single day.

Now a part of Pandora, Oz works to find illegal contractors, recover Alice's lost memories, figure out why the Baskervilles sent him to the Abyss in the first place, and unravel the mystery of a tragedy that occurred a century prior.

The answer... might be more complicated than you expect.

PandoraHearts is a Dark Fantasy manga by Jun Mochizuki (although it is considered an amalgamation of many, many different genres), which was serialized in Square Enix's Monthly G Fantasy magazine from 2006 to 2015. It was made into an anime series airing in 2009. Yen Press has published the English-language version of the manga for North America, and NIS America has announced their intent to localize the anime in a bid for new ground.

WARNING: To repeat a point mentioned previously, this manga is based (extremely loosely) on Alice's Adventures in Wonderland. And it's filled with allusions to other children's tales. Ye with sanity be warned.