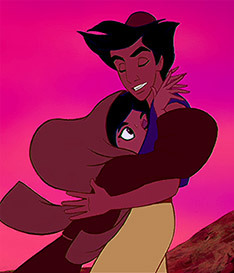 An obvious, yet effective way to put a stealth hug between two characters, especially in No Hugging, No Kissing worlds.

One of the characters, usually the female, trips over something or feels faint. Or maybe is jumping from a high place. Then, the other character, usually the male, catches him/her just in time to prevent him/her to hit the ground.

However, both characters don't move away from each another right away. They take their time. Maybe to comfort each other (which may evolve to Cry into Chest). Or maybe they are too busy looking into each other's eyes. Some extreme cases can even involve an Accidental Kiss, and some more moderate ones can lead to an Almost Kiss.

Compare to Accidental Hug and The Glomp. May overlap with Falling into His Arms.