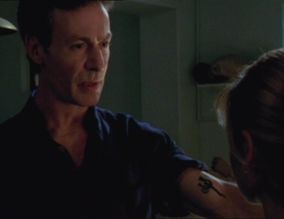 A man tries to get into the library to see Giles but a demonic woman shows up and strangles him to death. He falls to the floor, and she turns into a puddle of green slime.

At school, we see Buffy and Willow playing the game 'Anywhere But Here', in which they recount their some of their fantasies; Buffy is on a beach before sunset having her feet rubbed by Gavin Rossdale; Willow is in Florence at a restaurant eating ziti when she is joined by John Cusack. Giles tells Buffy to meet him later at the hospital where there will be a blood delivery, which attracts vampires. Giles runs into Jenny Calendar, who invites him for a date that weekend, a date that will involve them "staying in". When a cheerful Giles gets back to the library, a detective is waiting for him—the dead man had Giles' address on him. Giles identifies the body as that of an old friend from London. The body has a tattoo on it, which Giles claims he can't identify.

Shaken, Giles forgets to meet Buffy at the hospital, and she battles the vampires, who are disguised as doctors, alone until Angel shows up. She asks Angel to see that the blood gets to the hospital and goes to check on Giles. When Buffy goes to Giles' house to see what happened, he looks terribly drunk and sends her away. He calls a friend in London and finds out that she's dead, too. He crosses her name off of a list, and we see that several other names have also been crossed off. As he rolls up his sleeves, we see he has the same tattoo as his friend. Meanwhile, the dead friend, Phillip, comes back to life in the morgue, his eyes flashing, and escapes.

On Saturday, Willow, Xander, and Cordelia meet with Jenny Calendar for a computer class. Buffy shows up to express her concern about Giles' behavior. Cordelia mentions the police visit to the library, which slipped her Cordelia-centered mind. In the library, Buffy finds Ethan, the costume shop owner and Giles's former friend, who had almost gotten her killed on Halloween. As she calls Giles, Ethan mentions the "Mark of Eyghon". Giles says she's in danger, and the dead Phillip enters.

A panicked Giles shows up and, after a scuffle which leaves Jenny unconscious, Phillip turns into the green goo. Some of it gets on Jenny and when she comes to, she seems normal but we see her eyes flash. Willow then discovers the "Mark of Eyghon" in a book: Eyghon possesses the body of a dead or unconscious host. They figure out that he's jumped from Phillip's body to Jenny's. Jenny then tries to seduce Giles at his apartment. When he rebuffs her due to her recent trauma, the demon changes her appearance and voice so that it is clear it is no longer Jenny, and attacks. When Buffy comes to the rescue, Eyghon jumps out the window. Giles explains to Buffy that he ran with a bad crowd when he was young, and they used being possessed by Eyghon as a temporary high — directing the demon into and out of each others' bodies. It was fun until Eyghon killed the friend he was possessing. At that point, Giles left the group. More recently, Eygon killed the woman who killed Phillip, and now it seems Eyghon is seeking out the rest of the group to kill, too. Buffy goes to the deserted costume shop to try to help Ethan but he knocks her out, ties her up and puts the mark of Eyghon on her. He then pours acid on his own tattoo so that Eyghon will take Buffy instead of him. Jenny enters, now looking completely demonic, and approaches Buffy. But Buffy breaks free and starts fighting. Angel enters suddenly and chokes Jenny: Eyhgon's spirit then leaves her body and enters Angel's, since he's really dead (which happened to be Willow's plan all along). Eyghon fights Angel's demon, and is beaten. Jenny returns back to normal, but Ethan escapes.

Back at school, Jenny is cool to Rupert, who thinks she'll never forgive him.