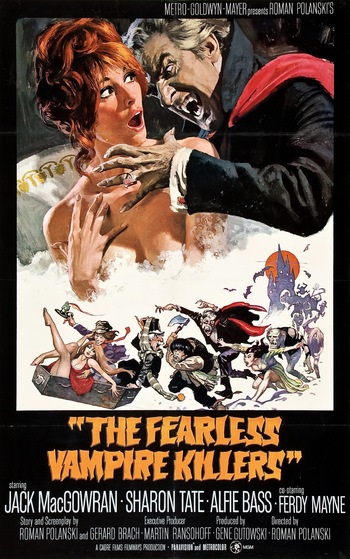 Poster art by Frank Frazetta
"Oy vey, have you got the wrong vampire!"
Advertisement:

The Fearless Vampire Killers, or: Pardon Me, But Your Teeth Are in My Neck — universally known as Dance of the Vampires outside of the U.S. (except for Italy, where it's known as Per Favore, Non Mordermi Sul Collo)note Please Don't Bite Me on the Neck — is a 1967 Horror Comedy film directed by Roman Polański (who also costarred and co-wrote the screenplay), which gives a good-natured ribbing to the vampire genre. It is today perhaps best known as the inspiration for Tanz Der Vampire, a Screen-to-Stage Adaptation which is very popular in Europe, as well as for being the film which introduced Polanski to his future wife, Sharon Tate.

Sometime in the late 19th century, the eminent — in his own mind, at least — vampire expert Professor Abronsius (Jack MacGowran) and his bumbling young assistant Alfred (Polanski) arrive in the dead of winter at a small Transylvanian village, seeking to track down and kill a nest of vampires that they believe are lurking nearby. Stopping to rest at a local inn, they become convinced that they are on the right track, both by the presence of garlic adorning every available surface, and by the reluctance of the innkeeper Shagal (Alfie Bass) and the rest of the locals to discuss the whereabouts of the nearby castle.

While Professor Abronsius spends his time surreptitiously searching for clues, Alfred meets and falls head-over-heels for Shagal's beautiful daughter Sarah (Tate). He is not the only one who notices her, however, and soon the lord of the local vampire coven, the elegant Count von Krolock (Ferdy Mayne), abducts her to his castle. When Shagal attempts to keep the interlopers out of the matter and heads out alone to rescue his daughter, he is quickly turned into a vampire himself. It therefore falls to our two heroes to travel to Castle von Krolock, rescue the fair Sarah, and put the curse of the undead to rest once and for all.