Film / Fiend Without a Face 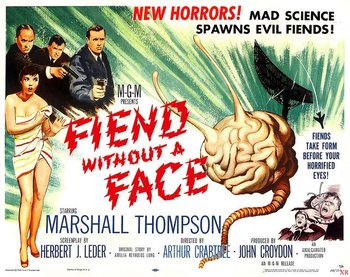 "All of my notes about its creation and how I thought it could be controlled were destroyed. I knew now that I had created a fiend."
— Professor Walgate
Advertisement:

A 1958 British Sci-Fi Horror film directed by Arthur Crabtree, based on the Weird Tales short story "The Thought-Monster" by Amelia Reynolds Long.

At a base in Canada, the U.S. Air Force is conducting long-range radar tests to try and get a leg up on those pesky Russians. The people living near the base don't like how the aircraft spook their animals, and the churlish Mayor Hawkins (James Dyrenforth) is spreading nasty rumors about the possible side effects of radiation from the atomic reactor powering the American radar equipment.

One night, people hear a mysterious thumping, schlurking noise, followed by a blood-curdling scream and the discovery of a corpse with a look of frozen horror on his face. More victims follow. This gives the locals, led by Hawkins, the ammo they need to bring grievances to the feet of base commander Colonel Butler (Stanley Maxted) and his second-in-command, Major Jeff Cummings (Marshall Thompson). Butler tasks Jeff with solving the mystery to restore good relations with the Canadians. He starts seeing Barbara Griselle (Kim Parker), the sister of the first victim. She works as a typist for a scientist named Professor Walgate (Kynaston Reeves).

Eventually Hawkins himself falls victim to the unseen menace. "Something" leaps onto him and he dies after a prolonged struggle with an invisible enemy. An Air Force doctor autopsies the victims and discovers that each person has had their brain sucked clean out!

Jeff theorizes that a "mental vampire" is at work. And when he discovers that Barbara's boss Professor Walgate has written several books about the "materialization of thought," he begins to suspect that the reclusive scientist is somehow behind it all.

It was released on DVD as part of the Criterion Collection.

Tropes Without a Face: