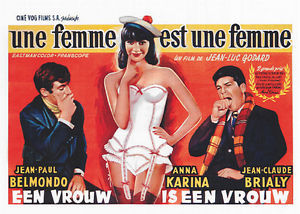 Une femme est une femme ("A Woman Is a Woman") is a 1961 film directed by Jean-Luc Godard.

It relates the story of a young woman named Angela Récamier (Anna Karina) who greatly wants to have a child and repeatedly requests so of her lover, Émile (Jean-Claude Braily). When he refuses to impregnate her and they begin a long fight, Angéla sleeps with Alfred (Jean-Paul Belmondo), Émile's best friend, out of spite and desperation.