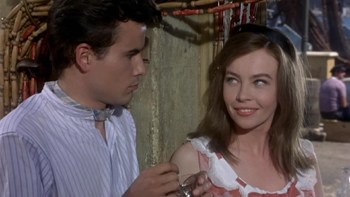 Fanny is a 1961 film directed by Joshua Logan, based on his own 1954 musical, but with the songs taken out. The musical was based on a trio of movies which were based on two stage plays by French playwright/filmmaker Marcel Pagnol. It starred Leslie Caron, Horst Buchholz, Maurice Chevalier, and Charles Boyer.

Marseille, in the 1920s. Fanny (Caron) is the radiantly beautiful 18-year-old daughter of a lady fishmonger. She is in love with Marius (Buchholz), the son of barkeeper Cesar (Boyer). Marius seems to like Fanny as well, but he's put out by her constant flirting with and teasing of Panisse (Chevalier), a wealthy merchant and widower who is at least 40 years older than Fanny is. Panisse for his part is smitten with gorgeous Fanny and hopes to marry her, despite the huge age difference. Meanwhile, Marius dreams of escape from sleepy provincial Marseilles, and has signed up to be a sailor on a research vessel that's going to spend five years sailing around the world.

No relation to musical group Fanny.