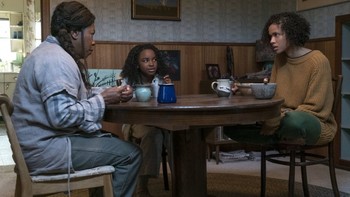 From left to right; Bo, Lila, and Ruth
Advertisement:

Fast Color is a 2018 drama about Ruth, a young woman whose seizures trigger earthquakes. It is the future in the midwestern US, and rain has not fallen for many years. Ruth is a wanderer trying elude the police, but finally on her way home. While on her journey, Ruth runs into a man at a diner, Bill. He offers her a ride and Ruth accepts, but he turns out to be a scientist trying to study her. When he forcibly attempts to draw blood samples from Ruth, she wounds him and escapes, running away in the direction of her old home. There she gets reunited with her mother Bo and daughter Lila, whom Ruth left years ago. Meanwhile, the local sheriff becomes aware that she's back due to Bill getting medical aid, and closes in...

The film was later announced to be continued with a TV series from Amazon.