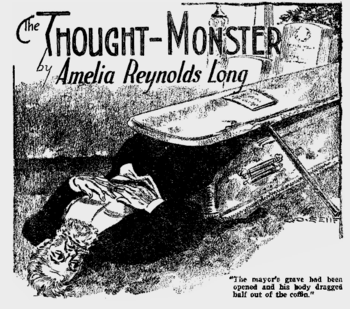 "The Thought-Monster" is a short story written by Amelia Reynolds Long. It was published in the March 1930 issue of Weird Tales.

A small town experiences a rash of mysterious deaths. Victims turn up dead with looks of horror on their faces. The culprit is dubbed "the terror" by the locals. A visiting policeman from New York City, Detective James Gibson, thinks it's just an escaped lunatic, and leads an Angry Mob to catch him. He turns up later, having been transformed into a gibbering idiot.

The terrified townsfolk turn to a "psychic investigator" named Michael Cummings, who is convinced that the killings are the work of an invisible supernatural force. Specifically, he thinks it has something to do with a scientist named Dr. Julian Walgate who lives outside of town, and he encourages the townspeople to discourage "the terror" from attacking by rigging up violet lights around their homes after dark, because (according to him anyway) violet light drives away supernatural beings.

Surprisingly, it works. When the lights are installed, the killings taper off and eventually stop... only to start up again after the creature apparently develops an immunity to the light. Cummings and coroner Dr. Bradley then go to confront Walgate after receiving a mysterious phone call from him, only to discover his journal detailing his experiments in the materialization of thought...

The Thought-Monster was adapted into the 1958 film Fiend Without a Face. It was directed by Arthur Crabtree with a screenplay by Herbert J. Leder, who relocated the story to Canada (The Thought Monster never really reveals where it takes place). Leder also changed Michael Cummings into an Air Force Major named Jeff Cummings and added a subplot about the USAF conducting long-range radar tests, among other changes and expansions.