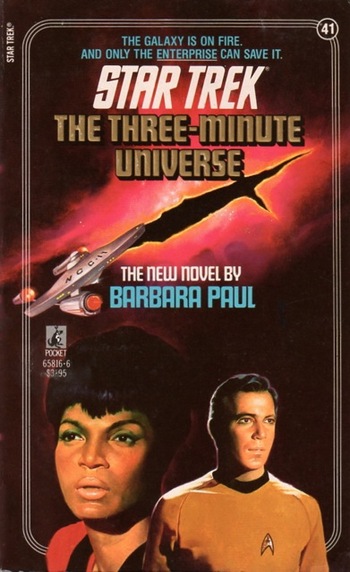 The Three Minute Universe is a Star Trek novel written by Barbara Paul about a race of repulsive aliens called Sackers. Noted to be peaceful, respectful, and mindful of local customs, their presence is dreaded throughout the galaxy due to their Bizarre Alien Biology due to their repulsive appearance, overpowering smell, a voice that can cause deafness, and skin so hot that a casual touch can cause second degree burns. Fed up with being pariahs where ever they go, the Sackers genocide an entire race of people and set off a Doomsday Device that opens a hole to another young universe that had just undergone a big bang. The intense heat is enough to burn up entire star systems and threatens the entire galaxy, possibly the entire universe. It's up to Kirk, Scotty, Uhura, and Chekov, who have been taken captive by the Sackers, to stop their plan and close the hole to the new universe before it's too late to get close enough to stop it.