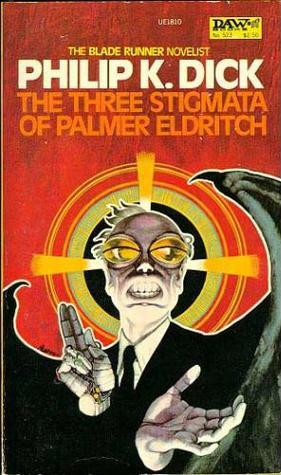 The Three Stigmata of Palmer Eldritch is a 1965 science fiction novel by Philip K. Dick.

The plot begins as several people are having very bad days. Barney Mayerson, a precognative fashion market analyst with a disaster of a personal life, has learned he's been drafted for the Martian colonization effort. This means leaving behind his life on Earth, and his cozy job at Perky Pat Layouts: producers of the popular Perky Pat line of collectables. Said items just happen to be perfect for guiding and enhancing a multiple-user sims-like experience by those using Can-D, a drug which induces a communal Virtual Reality-like hallucination.

His ex-wife Emily, meanwhile, learns that her attempt to sell her pottery designs to Perky Pat Layouts has been rejected, a decision which Barney had no involvement in whatsoever.

Leo Bulero, the head of the company Barney works for, has learned that rival businessman Palmer Eldritch has crash-landed on Pluto on his return from a trade mission with the aliens of the Prox system. Much to Bulero's dismay, Palmer not only seems to have miraculously survived, he's brought back a drug that allegedly makes Can-D seem like a cheap imitation. If true, the company's massive profits from both its official products and its off-the-books monopoly on Can-D could evaporate overnight.

From there things get increasingly weird in classic PKD fashion as the stakes slowly escalate far beyond financial concerns and personal relationships.