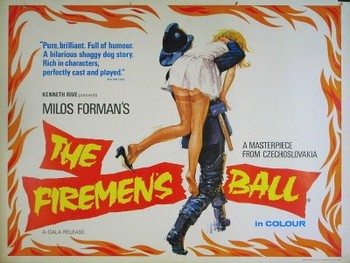 The firemen in some small Czech town are honoring one of their oldest colleagues, who is 85 years old and has terminal cancer, although apparently nobody's told him. They elect to hold a ball in the local dance hall, with prizes to be raffled off and a beauty contest. Unfortunately, the ball is a series of disasters. The elaborate banner that the firemen meant to hang from the rafters catches fire and burns up. The prizes are stolen, one at a time, right from under the noses of the chagrined firemen. The contestants for the Beauty Contest turn out to be a bunch of mostly homely girls who are unwillingly drafted into the competition—and when the girls literally run away at the start of the pageant, a riot breaks out.

Then a nearby home catches fire.

The Firemen's Ball was the first film Milos Forman made in color and the last that he made in his native country. It was part of the "Czech New Wave

", an explosion of creativity in Czech film that coincided with a period of political liberation that culminated in the Prague Spring

of 1968. When the Prague Spring was crushed by Soviet tanks, Forman and his fellow New Wave directors defected to the West. The Firemen's Ball ball was immediately banned and would remain banned in Czechoslovakia until the Velvet Revolution and the fall of Communism in 1989.

Used to be Keep Circulating the Tapes, but has since been released on DVD and Blu-Ray.