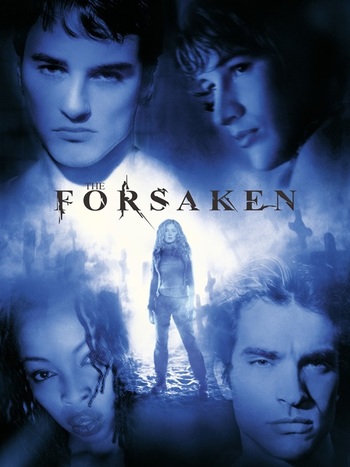 The Forsaken is 2001 horror movie about vampires directed by J. S. Cardone.

Sean (Kerr Smith) is driving cross-country to deliver a vintage Mercedes and attend his sister's wedding when he picks up hitchhiker Nick (Brendan Fehr), who just happens to be a Vampire Hunter, tracking down a cult of vampires who feed on unwary travelers. They run into Megan (Izabella Miko), who has been left for dead by the vampires. As they use her as a lure for the vampires, Sean becomes attracted to her. After Sean is infected with the vampire virus, he, Megan and Nick must race against time to kill the vampire leader Kit (Jonathan Schaech) to stop Sean from becoming one of the undead.

This movie contains examples of