Literature / Jessica's Guide to Dating on the Dark Side 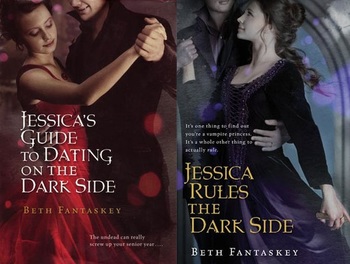 The debut novel of Beth Fantaskey, also known for Jekel Loves Hyde. A sequel, Jessica Rules The Dark Side, has been announced for the summer of 2011.

Antanasia Dragomir, renamed Jessica Packwood by her adopted parents, is a down-to-earth farm girl with a talent for mathematics and a resolute disdain for all things supernatural. The last thing she wanted was to find out that her birth parents were vampires, and that her vampire betrothed has come to claim her. Lucius Vladescu is handsome, arrogant, and determined to make her accept her heritage and marry him - or risk reigniting the feud which has been going on between their clans for generations.