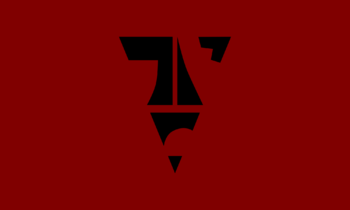 The flag of the New Irken Order, which serves as cover art for the series.
Advertisement:

Beginning sometime after the end of the canonical series, New Adventures continues the story of Zim's attempts to conquer Earth, opposed by his Arch-Enemy Dib Membrane. However, the battle between the two becomes more complicated when they encounter the vampire Norlock, who soon allies with Zim. This begins a whole new series of conflicts, as allies and enemies old and new join the fray, with the fate of the Earth hanging in the balance.

The series is ongoing. Season 1 is now complete and can be found here

. Season 2 is in progress and can be found here

Also has a non-canon spinoff, New Adventures: Mature Edition, which features older versions of the characters involved in more mature situations. It can be found here

Now has a recap page, and a character page.

Be cautious of Late Arrival Spoilers in later seasons.

The New Adventures of Invader Zim contains the following tropes: