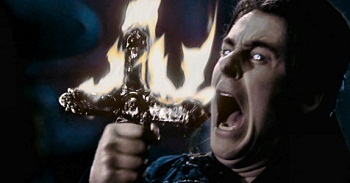 Dracula helps lighten the cross Van Helsing bears.
"This symbol, these two planks of wood, it confounds me. Suffuses me with mortal dread. But fear is in the mind." [puts his hand on the cross and holds on while it burns] "Like pain. It can be controlled. If I can face my fear, it cannot master me."
— The Master, Buffy the Vampire Slayer
Advertisement:

For the Occult Detective, Hunter of Monsters, and The Men in Black in charge of policing the supernatural threats that step out of line, a thorough knowledge of how Our Monsters Are Different is vital. They need to know all the Weaksauce Weaknesses, the various Kryptonite Factors, and develop Depleted Phlebotinum Shells in order to properly exploit the weaknesses of their prey. This is what helps level the playing field and save the lives of countless heroes as the forces of darkness run from the light hissing and burning.

Except, of course, when it doesn't.

Some especially old, powerful, determined, or twisted creatures may be so completely evil that they actually make the holy item crumble, spontaneously combust or even liquefy in apparent fear and impotence. Much like Holy Burns Evil but inverted, the evil character or force defiles the holy/pure item to the point it's destroyed or at least rendered inert.

Of course, such destruction is never subtle and is catered to the holy item. Holy statues will weep tears of blood, prayer slips will have their holy runes drip off, and the Place of Protection will sour and die. And crosses, as seen in the accompanying image, catch flame and either melt or burn to ash.

However, the evil character can still be one-upped if the holy influence is combined with a person who has great faith and virtue.

When a person is affected in this way, they are Allergic to Evil. Compare Fight Off the Kryptonite and Scissors Cuts Rock, for other characters resisting their weaknesses with raw power. Contrast Turn Undead, which can similarly be rebuked this way by a sufficiently powerful evil entity.

More than just crosses are effected when this vampire shows up.

More than just crosses are effected when this vampire shows up.