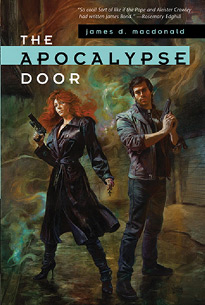 He's a priest. She's a nun. They fight crime.
Newark, New Jersey, isn't the city of Dis, but it could play the part on TV without spending a lot of time in rehearsals. By day, Newark's crowded and noisy and polluted, full of too many people going places too fast in pursuit of money or power or pleasure. By night, it's all that and dark as well, with danger waiting in the shadows to catch the unwary.
I'd just finished a job in Canada, checking out a report of Black Masses being celebrated, and was on a get-well tour in New York...
Advertisement:

The Apocalypse Door is a novel by James D. Macdonald. A hybrid of spy thriller and urban fantasy, it concerns the actions of the Catholic Church's secret service, in the person of Father Peter Crossman (of the Inner Temple of The Knights Templar) and Sister Mary Magdalene (of the Special Action Executive of the Poor Clares), and a mission involving mushrooms, a brazen idol, and the imminent end of the world. A series of interludes tell the story of a man named Michael on a doomed op that connects to the main plot in ways both obvious and unexpected.

Averts Christianity is Catholic to the extent it's not just window-dressing, or because the author doesn't know better; it's a deliberate attempt to create an intelligent and entertaining story within the Catholic world view, by an author who knows his subject. Everything the warrior priests and the fun nun with the gun do is justifiable within the Church's rules, and the fantastic elements are all drawn from Catholic lore. It should be emphasized that this doesn't mean the book isn't fun.

Peter Crossman and Mary Magdalene have also appeared in various short stories that originally appeared in Katherine Kurtz's Tales of the Knights Templar anthologies and have been collected in The Confessions of Peter Crossman.

The Apocalypse Door provides examples of: