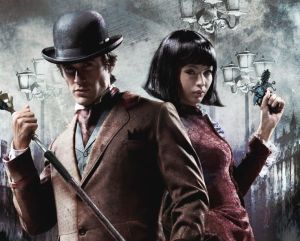 Apparatus Infernum is a series of novels written by Ann Aguirre and Andres Aguirre (under the merged name A. A. Aguirre). The setting is Steampunk-slash-Fantasy, probably falling within the Gaslamp Fantasy genre. It focuses on a pair of police investigators, Janus Mikani and Celeste Ritsuko.
Advertisement:

The two books released so far are: