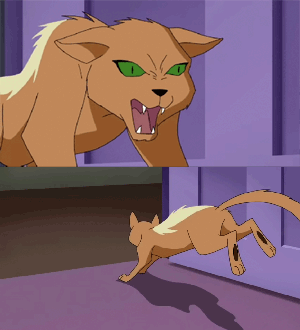 Jeez, no need to be so catty about it.
Advertisement:

The heroes have fought the monster, given it some good licks, but the monster isn't done yet. It pauses for a moment to hiss or screech loudly with its fangs out, its arms outstretched and claws extended, before leaping offscreen. Perhaps it just wanted to get the last word in. Time for the heroes to pursue.

Maybe it wants to frighten the heroes away, or just wants to vent some rage at being beaten up by mere humans. Whatever the case, it's Villain: Exit, Stage Left! Mostly, it's animal monsters that do this, though vampires and aliens are also fond of hissing before fleeing. Occasionally, anything that cause a burning reaction or Glamour Failure is sure to make the creature hiss before fleeing.

The exit counterpart to Roar Before Beating. It seems like while monsters roar to say hello, they hiss to say goodbye. This is a very common trope, possibly an Undead Horse Trope. It appears to be based on the idea that all animals are cats.

Variants for more humanoid villains include scowling or shaking a fist, often while spewing "Curse you!" or some other Badbutt insult.

In the Krusty Krab, the Slasher will repeatedly attempt to break in. Repelling him will make him hiss before retreating.

In the Krusty Krab, the Slasher will repeatedly attempt to break in. Repelling him will make him hiss before retreating.