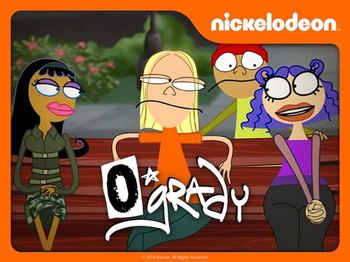 Not easy to believe that this stuff is real
Sometimes it's kinda cool but mostly just annoying
Paranormal world, I guess it's a weird place
O'GRADY!
O'GRADY!
—Kelly Osbourne, "O'Grady Theme Song"
Advertisement:

O'Grady was an original animated series, produced and aired by Noggin as part of its nighttime programming block for teens, called "The N." The show revolved around four normal teenagers in a suburban town. In each episode, the teens must cope with a different paranormal phenomenon that they call the "Weirdness". Kevin, Abby, Harold, and Beth's lives are complicated enough, and the "Weirdness" adds a hilarious twist.