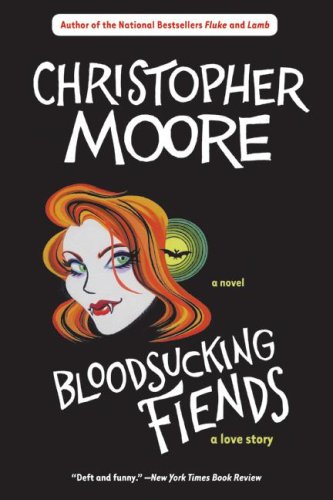 A trilogy written by Christopher Moore about vampires and romance... And no, it's nothing like Twilight. Although they are described as love stories, romance actually plays a surprisingly small role in these books. For the most part the genre fluctuates among comedy, drama, supernatural and suspense, with Moore's typical emphasis on comedy.
Advertisement:

The first book, Bloodsucking Fiends: A Love Story, is about 26-year-old Jody, living in modern-day San Francisco with her shallow and weak-willed boyfriend. The last nail is driven into the coffin of her crumbling relationship when she wakes up under a city dumpster with a horrible burn on her hand and a huge wad of cash stuffed in her shirt. She finds out that she's been unwittingly turned into a vampire.

Unable to do anything during the day, Jody enlists the help of Tommy, a 19-year-old who had just moved to San Francisco in hope of finding inspiration to help him kick-start his writing career. He works the night shift at a supermarket along with a crew of other young men aptly named "The Animals". The two move in together and start up a relationship. Jody's maker stalks her from place to place and leaves her "presents" (dead bodies) that make her into a prime suspect of an ongoing murder investigation.

The first sequel, You Suck: A Love Story, is about Jody and Tommy for some reason staying in San Francisco, despite the fact that it defies all common sense. Jody ends up turning Tommy into a vampire. This means that she has to find a new day person and she ends up recruiting the teenage goth girl, Abby Normal.

Bite Me: A Love Story, the third book, is about a wave of vampirism striking San Francisco. The main character of this book is Abby from You Suck.