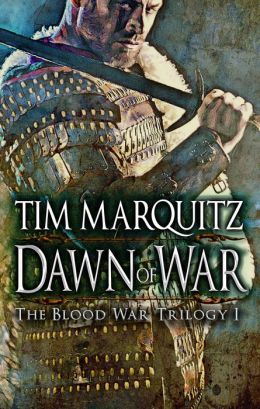 A war against extinction is being fought.
Advertisement:

The Blood War Trilogy is a Epic Fantasy series of books by Tim Marquitz.

For hundreds of years, the bestial Grol have clawed at the walls of Lathah without success. Now armed with O'hra, mystical weapons of great power, they have returned, to conquer. They're not the only ones.

Witness to the Grol advance, Arrin can abide his exile no longer. He returns to Lathah, in defiance of death, with hopes to save his beloved princess and the child born of their illicit affair. He finds her unwilling to abandon her people. At her behest, Arrin searches for a sanctuary for them only to be confronted by the Sha'ree, a powerful race long thought gone from the world. Through them, he learns it is not just the Grol that threaten the land.

Empowered by a magic never before seen, the savage nations spread chaos and ruin across the realm. With Lathah under siege, and the world on the brink of cataclysmic war, Arrin must strike a deal with the Sha'ree to take the fight to the Grol, or forever lose his one true love: his family.

Not to be confused with Planescape and its Blood War.

This series contains the following tropes

open/close all folders
Dawn of War
Embers of an Age
Requiem
Advertisement: