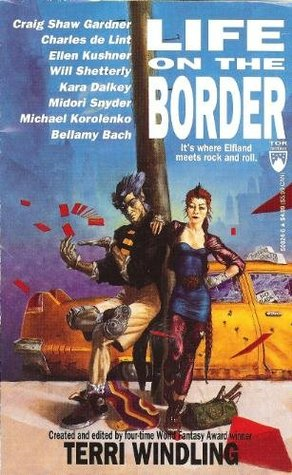 The Bordertown series (also known as the Borderland series) is a Shared Universe created by Terri Windling. The series was aimed at teenagers and thus focused heavily on Teen Issues like runaways, drugs and gangs. It featured contributions from the likes of Charles de Lint, Emma Bull, and Will Shetterly.

At some point in the near future, the Land of Faerie returns to earth, landing on Los Angeles and the vicinity (Wolfboy encounters a sign in the ruined Nevernever). There is a brief, abortive war between the Fey and the governments of the "real world" which tails out when both sides realize that their weapons won't work on the other side of the Border. After this formal diplomacy opens up, and meanwhile teenage runaways from both sides of The Wall populate the (now mostly empty) town on the edge and christen it Bordertown.

Bordertown is a semi-dystopian Urban Fantasy setting where technology and magic each work half the time in an unpredictable fashion. Outside the city, there is the magical wasteland called the Nevernever, and through it runs the Mad River, the water of which is an addictive drug to humans.

The series consists of five multi-author anthologies—Borderland, Bordertown, Life on the Border, The Essential Bordertown: A Traveller's Guide to the Edge of Faerie, and Welcome to Bordertown—and three novels—Elsewhere and Nevernever by Will Shetterly, and Finder by Emma Bull.

Not to be confused with the short-lived TV cartoon.

The stories in Borderland contain examples of:

Life on the Border

The stories in Life on the Border contain examples of:

The stories in The Essential Bordertown contain examples of:

The stories in Welcome to Bordertown contain examples of:

Elsewhere and Nevernever contain examples of: