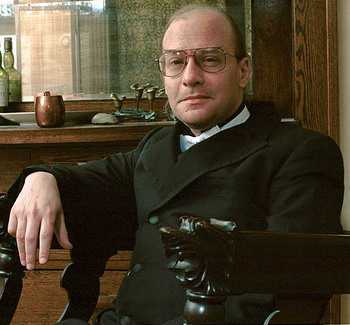 "Every book is three books, after all; the one the writer intended, the one the reader expected, and the one that casts its shadow when the first two meet by moonlight."
Advertisement:

John M. Ford (1957 - 2006) was an SF writer, game designer, and poet, noted for his intelligence, wit, and originality. This last was in a sense also his greatest weakness, since a writer who never repeats himself can be very hard to market effectively, and he never achieved the fame many feel he deserved. No less than Neil Gaiman and Robert A. Heinlein were great admirers of Ford and his work.

Probably his widely-known work is in a sense his least original — two novels in the Star Trek Expanded Universe, but even here he broke new ground: The Final Reflection is a historical novel of the early years of Federation-Klingon interaction, with a Klingon as its hero, and How Much for Just the Planet? is a musical comedy. He also co-wrote the Klingons sourcebook for FASA's Star Trek Tabletop Roleplaying Game, which was for a time the most complete and in-depth source on Klingon language and culture available. Much of it has been Outdated by Canon since the screen canon got serious about exploring Klingon culture, but there are still fans who think Ford's version was better, and not just in the sense that there will always be fans who think the old version was better. Even so, many feel that Ford's explorations directly influenced the evolution of the canon Klingons into their modern, honor-driven pseudo-Samurai form.

Notable poems include the sonnet "Against Entropy

". "Against Entropy" is cited as an example of Ford's extemporaneous brilliance: it was written and published less than eight hours after a prompt by one of Ford's editors.

And we haven't even scratched the surface of his original novels, which include Web of Angels, which did cyberpunk before cyberpunk was cool; The Princes of the Air, a Space Opera featuring a trio of con men; The Dragon Waiting, an Alternate History political thriller that won a World Fantasy award; The Scholars of Night, a Cold War thriller; Growing Up Weightless, a Philip K. Dick Award winner that's been described as one of the best Heinlein juveniles Robert A. Heinlein never wrote; and The Last Hot Time, a Chicago gangster story set 20 Minutes into the Future in which half the characters are elves.

after his tragic and untimely death in 2006. He left no will, his agent disappeared, and almost all his books fell out of print. Beginning in 2019, however, new agreements with his family brought his work back to life: Both The Dragon Waiting and The Scholars of Night came back to print, and his final unpublished novel Aspects is being published in April 2022.

Absolutely no relation to the acclaimed film director John Ford.

Works by John M. Ford with their own pages include: