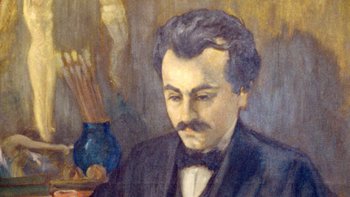 The Great American Poet
"Yesterday we obeyed kings and bent our necks before emperors. But today we kneel only before the truth."

Khalil Gibran (born Jubran Khalil Jubran; Arabic جبران خليل جبران , January 6, 1883 – April 10, 1931) also known as Kahlil Gibran,note Due to a spelling mistake made while he was in school that stuck to him was a Lebanese American artist, poet, and writer. Born in the town of Bsharri in modern-day Lebanon (then part of the Ottoman Mount Lebanon mutasarrifate), as a young man he emigrated with his family to the United States where he studied art and began his literary career. He is chiefly known in the English speaking world for his 1923 book The Prophet, an early example of inspirational fiction including a series of philosophical essays written in poetic English prose. The book sold well despite a cool critical reception, and became extremely popular in the 1960s counterculture. Gibran is the third best-selling poet of all time, behind William Shakespeare and Lao-Tzu.