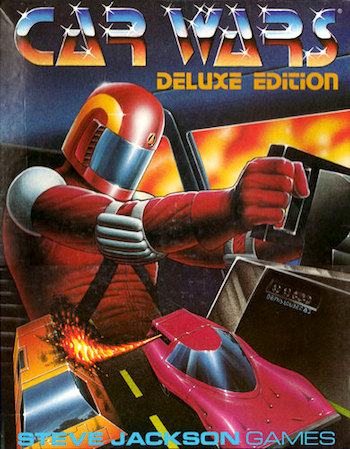 "Be Safe. Drive Offensively!"
"The right of way goes to the biggest guns."
Advertisement:

Car Wars was originally published by Steve Jackson Games in 1980. In this game, you typically play the role of an 'autoduellist', a futuristic sportsman who drove in autoduelling events. What's autoduelling, you say? Vehicular Combat as a future sport, of course.

The game was set 20 Minutes into the Future ... OK, well, 40-50 years. A number of crises have beset the North American continent, including a famine, a (minor) nuclear exchange, and a refighting of the Civil War. It's After the End, although it's not all the way at the end — in fact, truck stops are explicitly compared to medieval (or at least fantasy RPG) inns. Good thing, since there's bandits out there. The sport of autoduelling grew in this environment, what with people treating guns like adventurers might treat swords/axes/bows in fantasy settings. That, and 'Crazy Joe' Harshman winning a demolition derby by More Dakka. (Well, any dakka is more if you're the only one with it, right?)

Originally, the rules supported normal vehicles—cars and bikes. Naturally, a game system that lets you weaponise anything that's got an engine will expand, and sooner or later someone will wonder what the military will have once civilians are allowed rocket launchers, leaving room for Splatbooks to describe just that. The only vehicles that ended up unsupported were outright submarines and spacecraft note  The final supplement Golden Spike, which was announced but never produced, would have even provided rules for weaponized trains. when support stopped in the mid to late 1990s.

The game was supported by a wide range of expansions and supplemental rulebooks, a quarterly magazine that ran for 10 years, third-party supplements, a video game called Autoduel by Origin Systems, two different card games, a GURPS roleplaying setting, three novels and even a series of adventure books that mixed a Gamebooks format with actual game mechanics. The game hit its peak popularity in 1982 when Steve Jackson Games introduced their "pocket box" format and packaging, which included robust and complex games packaged in tiny, plastic cases (similar to DVD cases) that were both easy and practical to carry just about anywhere and affordable (at the time, a typical pocket box game cost around six US dollars). Car Wars, along with three roleplaying supplements (Truck Stop, Sunday Drivers and Boat Wars) received pocket box releases, while a near countless number of supplements continued to see release as books or bagged expansions - even after the pocket box format was discontinued in 1988.

Jackson tried a reboot the core game in the early 2000s with Car Wars 5.0, but the system never took off—it was sold as various prebuilt cars in two-packs with each having a copy of the rules, and gamers who thirsted for the construction rules never got them. It didn't fare that well.

Steve Jackson Games' 2017 The Fantasy Trip kickstarter revived the pocket box format - Melee and Wizard were added as a "what if" stretch goal which included both rules inside a redesigned plastic pocket box. After the immensely successful revival of TFT, Steve Jackson Games announced a Pocket Box Games of the Eighties

kickstarter that reprinted the first edition of Car Wars in the pocket box format, spread across four boxed bundles that included a whopping twenty-two supplements. Other games that were a part of this were Ogre, Illuminati, and some of their more obscure legacy games like Raid On Iran and The Awful Green Things From Outer Space.

Items that weren't available in the Kickstarter, such as the Compendium (rules omnibus), Uncle Al's Catalog from Hell, and rules for planes and tanks, are generally available in PDF format from Warehouse 23

. In addition, Uncle Al's is available in print-on-demand.

they would be doing a similar Kickstarter

for Car Wars at the end of 2019, after absorbing the lessons from the previous fundraiser. The new Sixth Edition has been released, and includes large (Hot Wheels size) paintable miniatures, custom dice, and a new card-based build system. It also moves the timeline by 35 years, so that (for example) the Food Riots happen in 2051 instead of 2016, and "Crazy Joe" brought a .50-cal to a demolition derby in 2058 instead of 2023.