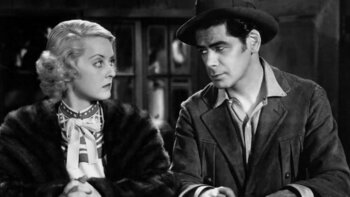 Bordertown is a 1935 film directed by Archie Mayo.

Johnny Ramirez (Paul Muni) is a Mexican-American man living in Los Angeles. Driven by ambition to make something better of himself, Johnny has slaved away for five years going to law school by night, and as the film opens, has just graduated. He has dreams of success, and takes on the case of a humble produce salesman whose truck was hit by Dale Elwell (Margaret Lindsay), a socialite who was driving drunk.

The lawsuit goes to court but apparently Johnny's law school lessons didn't take, as he horribly botches the case and the suit is summarily dismissed. When Dale's attorney, a sneering arrogant WASP type, mocks him, Johnny punches the WASP in the face. This gets him disbarred. Johnny, who now believes that you can't enter into the ranks of the respectable without money, decides to get money however he can.

1940 film They Drive by Night is a semi-remake.