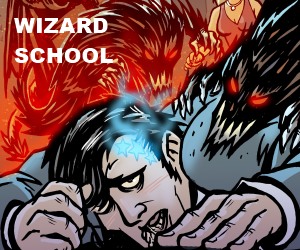 Biggest regret over a drunken evening? Blue stars all over your face.

"Just like that other magical boarding school... if the top student spent all his time trying to conjure strippers."

is a webcomic parodying Harry Potter that updates Mondays and Wednesdays.

The comic is about Russell Graham, a drunken, arrogant rich guy who is substituted for the "Chosen One" after being tattooed with an identical mark on his face by the comic's villain. Graham is then found by agents from Bumblebane's Magical Academy of the Wizarding Arts, who take him to their wizard school for training.