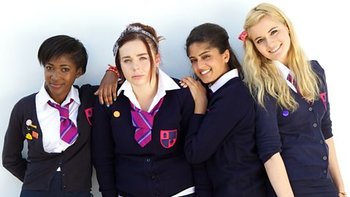 from left to right; Viva, Holli, Saz and Amber.
Advertisement:

Some Girls is a Brit Com written by Bernadette Davis that aired, on the now online only channel, BBC3. It ran from November 2012, and finished in December 2014, and ran for three seasons.

The series revolves around Viva and her three friends; the delinquent Holli, the maths geek Saz, and the ditzy but well meaning Amber. All four live on the same housing estate, attend the same school, and even play on the same football team, that just so happens to be coached by Viva's stepmother.

The show follows the girls and their day-to-day struggles with boys, homework, self-esteem issues, bullying, their families, and boys. They discuss sex and other such subjects with such frequency that a lot of the humour is based around the fact that it Crosses the Line Twice, along with the fact that almost every other word is a swear word. However, the show was applauded for its accurate depiction of teenage girls, which in turn was inspired by how teenage boys were shown in The Inbetweeners.