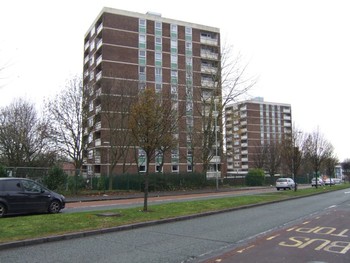 Wolverhampton's Boscobel Estate, built in The '60s.
"Ambition on the Jasmine [Allen] is getting to 18 without a record or a habit."
— The Bill
Advertisement:

A particularly common thing in the UK is for housing to be owned by local councils or non-profit housing associations. About 20% of housing in the UK is owned by these groups and rented to people, with the aim that allocation be based on their need. The US equivalent, in both function and reputation, is the "projects", officially known as "Section 8" or "housing vouchers", also known colloquially as "HUDnote for Housing and Urban Development, a department of the US federal government apartments".

The bulk of these houses were built in the period of the 1930s to the 1960s. The Second World War in particular created large demand for them, and not coincidentally a lot of space for them to be put.

In the '50s and '60s, large tower blocks were the fashion, resulting in tall, ugly buildings dotting up across much of the UK's cities and providing inspiration for even bigger things in fiction. Between inexperience with new pre-cast concrete construction techniques used to erect them and the urgent housing shortagenote the Victorian and Edwardian terraced housing they were intended to replace was already badly overcrowded and dilapidated by the 1930s; German bombing raids just made it worse, a lot of housing was thrown up in great haste and without much attention paid to good workmanship, souring their reputation with the public. Bad planning (lack of amenities within walking distance, elderly or disabled residents who couldn't cope with lots of stairs housed on the top floors of high buildings etc), the breakup of established communities and irregular maintenance didn't help either. And many such blocks would prove dangerous, as the horrific Grenfell Tower fire in 2017 showed.

In the '80s, the Thatcher government created the "Right to Buy" scheme, which allowed people to purchase their homes at a discounted price after a certain period. This resulted in much of the former stock disappearing into the private market and "council house" becoming a pejorative term.

Council estates today are perceived as places of high crime and deprivation, populated by asylum seekersnote  (there is no evidence that they jump the queue at all, although their homeless status can buy them a few more points on most housing associations' scales of need), the long-term unemployed, and teenage mothers who got pregnant just to get a council flatnote However, this stigma is at least somewhat less prevalent in Scotland, possibly due to the broadly further-left political culture there. This has not been helped by the recent Shannon Matthews case, where a mother pretended her own daughter had been kidnapped (her lover was in fact holding her) in order to gain publicity and money from the press.

Many councils have decided the best way to solve their housing problems is with the judicious use of high explosives, demolishing tower blocks and building better houses.

There is also a somewhat prevalent view among the middle classes that people living in council houses are richer than before, but are using this wealth as disposable income rather than for social mobility, as in the joke "What is the technical name for the box attached to a satellite dish?" "A council house."

Contrast with "Friends" Rent Control and Standardized Sitcom Housing, which more often than not are averted here.