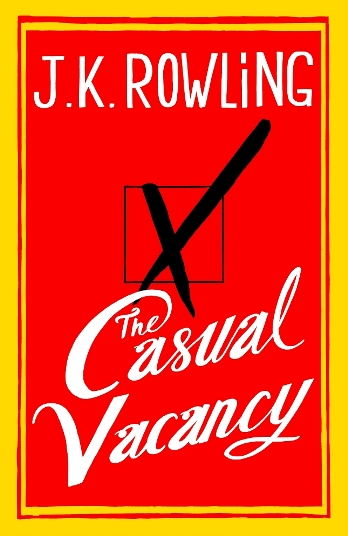 A big novel about a small town.
They were all perfectly ridiculous, Samantha thought, sitting here in front of Shirley’s commemorative plates as if they were in the Cabinet Room in Downing Street, as though one bit of tittle-tattle on a Parish Council website constituted an organized campaign, as though any of it mattered.
Advertisement:

The Casual Vacancy is a 2012 Lit Fic novel by J. K. Rowling, and her first book outside of the Harry Potter-verse.

It's 20 Minutes into the Past, and the little English town of Pagford is in shock. Barry Fairbrother, a popular member of the local parish council,

has dropped dead of a brain aneurysm on his wedding anniversary. Though everyone is impacted by his death, the ensuing drama and election to fill the casual vacancynote In British (and Australian and New Zealand) electoral terminology, a vacancy in an elected position left by a chance occurrence like death or incapacity of the elected member Barry left behind reveals a town that is tearing itself apart over what to do with a housing project known as "The Fields", that is outside the jurisdiction of both Pagford and the neighbouring larger town of Yarvil. The novel follows a rotating cast of characters as egos are bruised and family tensions boil over, and meanwhile, a certain mysterious someone is posting townsfolk secrets on the local website...

The BBC have also adapted the novel into a TV miniseries, which is considerably Lighter and Softer than the book.

The Casual Vacancy Provides Examples Of: