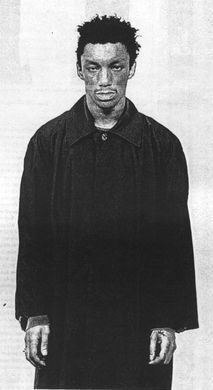 His brain thinks bomb-like
Every time you go away, I feel the pain
I feel the same, it's like the rain
I hear your name, I fall apart
This is the end, why do we start?
- "The Only Way"
Advertisement:

Adrian Nicholas Matthews Thaws, better known by his stage name Tricky, is an black British record producer, rapper, vocalist, and author known for his murky, layered production style and being a pioneer of the trip hop genre alongside fellow Bristol contemporaries Portishead and Massive Attack.

Born in the Knowle West area of Bristol, he would experience a tumultuous childhood with his mother dying when he was very young and himself getting involved with crime and gang activity at an early age. He would set aside gang life in order to focus on music, penning lyrics and rapping in the mid-'80s. At first, he was a member of the Wild Bunch, a local rap crew that eventually became Massive Attack before the decade was out. He would provide raps for the group's debut album, Blue Lines, before releasing his debut solo single, "Aftermath". Around this time, he would also meet a teenage vocalist named Martina Topley-Bird, who went on to become one of his most noted musical collaborators.

In 1994, Tricky signed with 4th & Broadway. The contract contained a clause that allowed him to release side projects under different names, in addition to regular Tricky releases. Tracks such as "Ponderosa" and "Overcome" were released over the course of 1994 and that same year, he would be featured on Massive Attack's second studio album, Protection. The following spring of 1995, Tricky's debut album, Maxinquaye, would be released. Not only did the album receive overwhelmingly positive reviews when it was released, but it had also entered the U.K. charts at number two. He would also release Tricky vs. the Gravediggaz, a collaboration with the American hardcore rap group of the same name, as well as a single called "I Be the Prophet", which was released under the name Starving Souls.

The following year, Nearly God an album released under the same name containing what Tricky called, "a compilation of exceptional yet unfinished demos", was issued to positive reviews, it came out in the U.S. six months later. Two months later, Tricky's official second album under his own name, Pre-Millennium Tension, was released. The album went on to become his second-best selling in the U.S. and his first to chart on the Billboard 200. In addition to his three releases of 1996, he remixed artists as diverse as Björk, Neneh Cherry, and Elvis Costello. Tricky's next full-length solo effort, Angels with Dirty Faces, would follow in 1998, followed a year later by Juxtapose, a collaboration with Cypress Hill's DJ Muggs and DMX's producer Dame Grease.

In 2001, Tricky returned with the Mission Accomplished EP, which was released by the Epitaph subsidiary label Anti. Blowback, his first record (seventh overall, counting Nearly God) for Hollywood Records, appeared later that June and included collaborations with the likes of artists such as Alanis Morissette, and John Frusciante. Increasingly aware of his dour personality in the media and irritated that popular music magazines had started labeling him "the Dark Prince", he made his eighth album, Vulnerable, in 2003 in an attempt to re-expose himself as a pop artist. The same year, the Back to Mine label released an remix album that he compiled before he took a five-year hiatus from recording new material.

His next following records Knowle West Boy and Mixed Face would appear in 2008 and 2010, respectively. After which he would leave Domino Records to start up his own record label called False Idols for which he would release a record of the same name in 2013. After a couple of years of touring and festival appearances, he announced details of his tenth album, Adrian Thaws and released that following year. Skilled Mechanics would come in 2016, and, similar to Nearly God, it was a quasi-unofficial record under a different pseudonym and contained features from Oh Land and Luke Harris.

His thirteenth official studio album, ununiform, was released on 22 September 2017, and featured collaborations with Asia Argento, Martina Topley-Bird, and Avalon Lurks, who would contribute vocals to a cover of Hole's "Doll Parts"

Taking a break from music, he penned an autobiography titled Hell Is Round the Corner, which was released in 2019. That same year, Mina Mazy, his daughter with Topley-Bird, died by suicide at the age of 24. In his grief, he processed it by recording. The resulting EP, 20, 20, arrived early in 2020 and featured collaborations with Marta and Anika. More music from those sessions appeared later on his 14th full-length Fall to Pieces, which once again featured vocal contributions from Marta and a returning Oh Land.